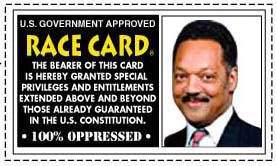 If two men were applying for the same job and they were the same age, equally educated, identical experience, and both pleasant people, how would one chose? What if one was Black and the other one was White, and they gave the job to the White man; would that raise an eyebrow?

Would you first assume it was because they saw something unique in the White candidate that was not on paper or would you assume it was simply because he was White? Do you think this is a cause to play the race card? Or if someone plays the race card, are they overreacting?

Over 50 years ago Rosa Parks, the Little Rock Nine, and Emmett Till made headline news because they were treated unfairly simply because they were Black. Today when certain Blacks make headline news, such as Michael Vick and Troy Davis, some still play the race card, but should they? Is racism still alive and well or is it something that Blacks need to let go of?

“I think as a society we have moved past racism in many ways,” says Berlyn. “I do feel that Blacks play the race card still. I think in a social setting, it is for the most part a non-issue.”

If racism is a non–issue then we all have evolved.  We have fought the good fight and Martin Luther King, Jr.’s dream has come to fruition. But has it?

Why is the race card still being thrown around? Why are there so many Black citizens on the news saying they are being treated unfairly because they are Black? Is it just an issue with Black people, or is playing the race card the right claim to make?

“I believe racism still exists and playing the race card, most times, is relevant,” Diane chimes in. “One day my great grandmother was talking about how she made good friends with a negra (a female negro) lady who lived down the street. She said they would talk, sew, and play cards together. I thought this was cool,” she continues, “since I had never known my granny to have ANY Black friends. Then she dropped a bomb by saying, and ‘she’s a good negra.  When she comes over she comes to the back door. She knows her place.’ And my grandmother teaches my younger cousin that same mentality.”

Although hate is still being taught to a younger generation it seems to only be to a small percentage.  The 2008 presidential election is a prime example of a newer thinking, when this country elected their first Black president. During his election, playing the race card was never an issue. However, now with the president’s approval ratings down, some people are now playing the race card. Is this valid?

In his new book Journey to the White House, Hermain Cain says, “While I don’t believe that Barrack Obama used racial issues to get elected, I do believe that many of his supporters selectively use race to cover up some of his failures.”

“I do think some people give the president a hard time because he’s Black, but I don’t think it’s most people,” says Erin. “I think some people, raised to believe that people are categorically different, will use the president’s race to apply motive to the things they don’t like. We can only hope that their hatred will be watered down over the generations.”

I asked Erin if she thinks Blacks play the race card too much and she responded, “I think it’s a complicated issue. I do think some people have a chip on their shoulder and play the race card when it isn’t in play. That said, I definitely think racism is alive and well. A trip to North Carolina would show you a self imposed segregation between Whites and Blacks.”

It is interesting that she mentioned North Carolina still being somewhat segregated in 2011 when another person said something totally different about racism being prevalent.

“I don’t understand why Blacks keep bringing up slavery.  That happened a long time ago,” says one man in Los Angeles. “They are the ones holding on to the past, it’s time to move on.”

However, Diane disagrees. “Selma, Ala. was only 46 years ago. White people have had thousands and thousands of years of a HEAD START in establishing themselves in society. From what I’ve experienced, racism is totally still an issue and has YEARS to go before it evens out.  So in my opinion, if Black people are playing the race card, it’s probably because they have a good reason to.”

There is no way to know if someone is being treated unfairly simply because of their race and because of that, some Blacks will use the race card when they see no other reason for being treated unfairly, other than the color of their skin. Once King’s dream really comes to fruition and we do not judge on the color of each other’s skin, and we treat each other as equal human beings then we all, Blacks and Whites, can stop playing the race card.