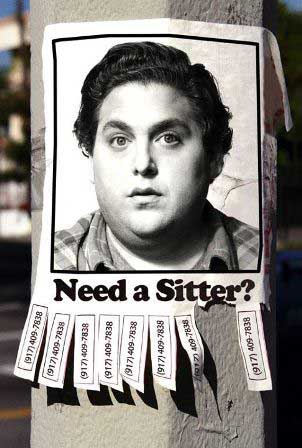 Laughing in Your Seat

Jonah Hill may have a new look, but in The Sitter film he is still his old self.  And although comedies that star actors like Hill or Seth Rogen follow the same script, that recycled script never gets old and moviegoers will definitely not be disappointed in Hill’s new film, even though he is upstaged by someone young enough to be his daughter.

Hill stars as Noah, the lazy and unmotivated ex-college student, with a hot name from that hot book, the Bible.  When his mother is hooked up on a blind date by a friend, he is forced to babysit the friend’s three children, who could very well be shepherds for the devil since they raise so much hell.  Although he plans for a quick payday as a babysitter, especially after he advises his mother not to give it up so easily, his plans go awry when his mother’s date lasts longer than planned, and one of the children in his care steals a dinosaur egg filled with thousands of dollars worth of cocaine from a drug dealer.

The Sitter film stars several household names like Method Man and J.B. Smoove, but the lesser known stars (or future stars I should say) carry this film and produce the most laughter.

Blithe (Landry Bender) is an elementary student who is determined to be a superstar, just for superstardom’s sake.  She has dreams of starting her own fragrance and wants to visit all of the hot clubs instead of playing in a clubhouse like most girls her age.  Her mother allows her to play dress up, but Blithe is more concerned with playing makeup, using her face like a painter’s canvas, but creating something far from a masterpiece.

Although Slater (Max Records) looks like a young model for The Gap, this 13-year-old is going through an identity struggle and has more issues than someone twice his age.  He misses the camaraderie of his male friend who no longer wants to be best friends with him.  Instead of hanging out with the twin girls who are in love with him, he would rather watch gymnastics alone on his parent’s couch.

Despite having two beautiful children, Blithe and Slater’s parents Dr. and Mrs. Pedulla take in an unruly foster child Rodrigo (Kevin Hernandez) who has a fascination with fireworks and cherry bombs.  He does not interact very much with the Pedulla family.  Rodrigo is used to being shipped from family to family like most foster children and deals with his pent up anger by being destructive to the property and people around him

Although The Sitter film is full of laughs like most of Hill’s movies are, the movie succeeds because of its charm.  Noah is not the most mature person for his age but he is OK with being himself and that is what he teaches these children who have not learned to be comfortable in their own skin.

After he bonds with them, Noah is willing to do whatever it takes to protect the children’s interest.  He boasts about how much guts he has, and proves why his “goods” are too big for underwear.

And speaking of good, The Sitter film is definitely that and Hill produces big laughs, even though he is no longer big in stature.