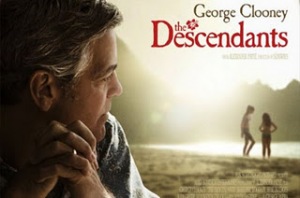 Other Side of the Game

George Clooney should be applauded for his most recent movie, The Descendants.  This side of a romantic relationship or marriage is rarely shown on the big or small screen.  It is the story of a devoted husband and father who is cheated on by his wife, but still loves her unconditionally and becomes mother and father to their children when the relationship does not work out.

The Descendants movie is a heartfelt story of a father (George Clooney) desperately trying to save the life of his wife, and subsequently save his marriage, while suddenly adjusting to single fatherhood.

On the outside, Matt’s (Clooney) life seems like paradise.  He lives on the beautiful island of Hawaii.  He has a beautiful family and he is sitting on property that could potentially make his family wealthy beyond imagination.  There is only one problem.  All that glitters is definitely not gold.

Matt and his wife have not spoken in months, but he is forced to her bedside after she is critically injured on a speed boat.  Despite the lack of communication in the relationship, the love that Matt once felt for his wife returns after she is reduced to a vegetative state.

He is forced into the role of both parents for his two unruly daughters Scottie (Amara Miller) and Alex (Shailene Woodley).

Though a talented photographer, Scottie relentlessly taunts classmates at school.  And despite being shipped off to boarding school, Alex still has affection for alcohol and boys, but has no place in her life for parental authority.

While The Descendants movie definitely has many funny moments, thanks to Scottie, the movie succeeds because of its heartfelt moments involving Matt.  He represents the male underdog who unfortunately never gets sympathy after getting a raw deal in marriage, because sympathy is usually reserved for women when a relationship does not work.

Nevertheless, Matt reaches a virtual breaking point when Alex informs him that Elizabeth had been cheating on him for some time. Despite the revelation and his desperate desire to know more about the details of his wife’s affair, Matt is still amazingly able to maintain his anger and do right by his wife and her loved-ones.

The Descendants movie is credited as the first time Clooney cries on film and it is refreshing to see a man able to express his true emotions after heartbreak.  Nevertheless, seeing Clooney run in sandals is very awkward and maybe even more amusing than Miller, the comedic star of The Descendants movie.

Despite the emotional roller coaster Matt experiences he is able to rally his family with love and compassion and shows that men are more than capable of holding the fort down when the matriarch is no longer there or unable to.

From the outset of The Descendants movie you will find yourself cheering for Matt, hoping that he finds peace and love.  Furthermore, you will fall in love with Miller’s performance as Scottie.  She gives the heartfelt film just the right comedic touch.

The Descendants movie is simply powerful and it shows that with love a family can conquer any obstacle.