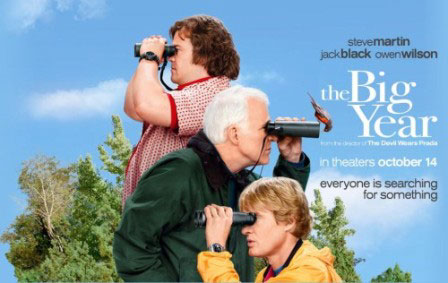 Like the old cliché says, “this one is for the birds.”  And for once this statement can be taken literally.

If one is a bird enthusiast, they will probably like the plot of this movie, but if you only like your birds smoked or deep fried, then The Big Year movie is worth skipping.

Although The Big Year movie centers on “birders,” and the competition to see as many exotic birds in one calendar year, it is a metaphor for all obsessions that take us away from what is important in life, such as our families and our careers.

Comedian Jack Black plays Brad, a 36-year-old divorcee who spends his day rocking out to bird sounds on his iPod instead of rock music like most “normal” thirty-something’s.  Although he works for Bill (Anthony Anderson), an understanding boss and makes a living, his passion is “birding” and he decides to participate in the Big Year competition, despite the protests of his old school father.

Nevertheless, he secretly enters the contest, even though the competition has been dominated by the obsessively competitive Bostick (Owen Wilson).  Bostick will do anything within the rules to win the competition, even if that means putting his wife and future children on the back burner for the prestige of being the Big Year champion.

While on the competitive bird trail, Brad befriends the older Stu (Steve Martin) who has climbed the corporate ladder of success, married a loving wife and raised a successful son, but has bypassed his “birding” passions for success on Wall Street.  After attempting to retire several times, Stu finally finds enough guts to walk away and chase his dreams, despite the protests of his corporate co-workers.

Brad’s friendship with Stu is tested in The Big Year movie, but the two finally team up in an attempt to take down Bostick and claim the coveted championship.

Despite the universal theme that our hobbies should not take precedence over what is important in life like family and happiness, The Big Year movie presents itself as a comedy and with such legends as Black, Wilson and Martin the film should have been hilarious, but it is not.  It tries desperately to get a few laughs from the audience but those laughs seem forced by the audience.  The bird noises that Black mastered are only slightly funny because they are reminiscent of the character Cole from the sitcom “Martin” who mastered bird sounds in an attempt to woo Pam on the show.

And in much the same way that Cole failed to woo his target, The Big Year movie will fail to woo moviegoers, unfortunately.

Nevertheless, Brad and Stu eventually return to what is important in life.  Brad catches the eye of the beautiful Ellie (Rashida Jones) and Stu settles into his role as a retired grandfather.  Bostick soon realizes that winning is not the only thing, especially when you lose the most important thing in your life.

Unfortunately, the fascination with birds will be lost on the audience, despite the beauty of the creatures, meaning this film is for those who can relate to the “birders” and not everyone else.