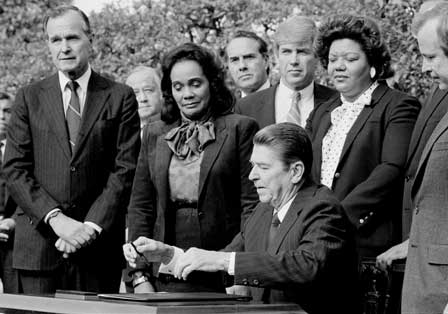 Martin Luther King Jr. Day 2011; It is Relevant Today More than Ever

For those who may only believe it is a day out of school or another occasion to shop, let’s be clear about Martin Luther King Jr. Day 2011.  It is a day to celebrate the life of a man who put his principles above all else, including his own life.

When you hear the “I Have a Dream” speech at a school program or celebration event, listen to the words themselves and you will understand the real purpose behind Rev. Dr. Martin Luther King Jr.’s mission.

He spoke of the challenges ahead and the goals to achieve in the areas of family unity, civil rights, religious tolerance, human dignity and social justice. Many of those challenges still exist and those goals have not yet been reached, so Martin Luther King Jr. Day 2011 is still relevant.

It was a long, hard fought battle to earn the day as a celebration. Many were involved and the event, after the holiday was signed into law by President Ronald Reagan in 1983, was commemorated by Stevie Wonder whose rhythmic song, “Happy Birthday” became the anthem for the holiday and reinforced the reason to remember the man who “celebrated peace around the world.”

I had the occasion to speak to Yolanda King, Dr. King’s oldest daughter, before her untimely death and she brought home another aspect surrounding the recognitions for him.  She reminded me that he was a father, her father and each year she would be reminded of the loss of her father, but also about his impact on the lives of people around the world.

She was proud of his accomplishments in his short life and held onto her own private memories of the man she knew as Daddy.  As we are bombarded with the often one-sided, negative views of African American fathers, we can look to Martin Luther King Jr. Day 2011 as a time to reflect on the many African American fathers who are positive role models for their families and productive citizens in the community.

In addition to his impact on the image of family, he dreamed of a day when there would be no hatred based on color, religious affiliation or geography and that people from different ethnic and religious groups could all come together in peace and harmony.

His stirring speeches all reflect a “call to action” in the redesign of the human condition and for those who have been oppressed to know that they are worthy human beings.

He knew that the best way to overcome oppression is through peaceful resistance and to help your enemy to better understand you and to seek common ground.

Martin Luther King Jr. Day 2011 is still relevant as there are many dividing lines in society today that could be erased with better communication and less prejudice.  In his “How Long, Not Long” speech given on the steps of the State Capital in Montgomery, Ala. on March 25, 1965, he emphasized this point.

“The battle is in our hands. And we can answer with creative non-violence the call to higher ground to which the new directions of our struggle summons us.  The road ahead is not altogether a smooth one.  There are no broad highways that lead us easily and inevitably to quick solutions. But we must keep going…Our aim must never be to defeat or humiliate the White man, but to win his friendship and understanding. We must come to see that the end we seek is a society at peace with itself, a society that can live with its conscience. And that will be a day not of the White man, not of the Black man. That will be the day of man as man. “

Martin Luther King Jr. Day 2011 is still relevant as we strive to achieve a society that is colorblind, compassionate and open-minded. We must find more non-violent ways to resolve conflicts similar to those preached and practiced by Dr. King, who was influenced by the teachings of Mahatma Gandhi.

According to Philo Gabriel, who wrote “The Influence of Mahatma Gandhi on Martin Luther King and The Civil Rights Movement,”  Dr. King, who based most of his non-violence philosophy from teachings in the Bible, was also “greatly influenced by certain non-Christian ideas. Perhaps most important of these was the philosophy of non-violence practiced by Mohandas ‘Mahatma’ Gandhi, the spiritual leader of India’s independence movement in the first half of the 20th century.”

Dr. King had a global mindset early on and many of his writings and speeches have become the foundation for study worldwide and have served as the framework for non-violent interactions.

His winning the Nobel Peace Prize was no accident and although his life was cut short in April 1968, his legacy and quest for peace lives on.

Martin Luther King Jr. Day 2011 is not just a national holiday, but a global awareness day to reflect, remember and re-charge efforts to use non-violence and open communication to break the chains of all “isms” in society and the other forms of mental and physical bondage so that we day we all can be “free at last.”