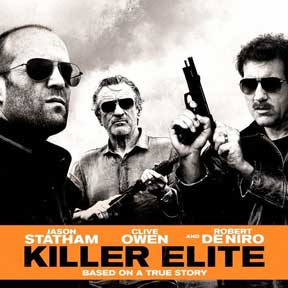 Killer Elite is a movie worth seeing; it is just not a must-see movie unfortunately.

The new action flick is a film based on a true story of hired killers, one desperately trying to get out of the game, Danny (Jason Statham) and one trying to milk the game for all it is worth, Hunter (De Niro).

After a hit in Mexico goes wrong, which involves an innocent child; Danny has had enough of the killing business and retires to the country.  However, his mentor Hunter, driven by greed takes another contract, attempts to escape with millions of dollars and is imprisoned for his actions.

Being a loyal pupil, Danny agrees to one more contract in an effort to free his friend from captivity.  A dying Middle Eastern sheik wants to avenge the murders of his three sons, which would allow his only surviving son to return to their homeland with dignity and Danny feels obligated to fulfill his end of the contract.

However, the three men with a contract on their head are protected by a secret military society known as the Feather Men, led by Spike (Clive Owen).  What ensues in the Killer Elite movie is the typical shoot ‘em movie that action movie buffs have seen many times before.  It is the story of the predator and the prey, good versus evil, which includes the typical Hollywood action movie conclusion.

It is not that the Killer Elite movie is not a somewhat enjoyable film; it is that it does not stand out enough to be a good film.  What the Killer Elite movie has going for it is the star power of De Niro, Owen and Statham, but that will not necessarily translate into box office gold because the stereotypical tough guys who will enjoy this film have many other tough guy options to occupy their weekends like the religion known as football.

The cinematography in the Killer Elite movie could have also been better, because the film suffers mightily from badly lit shots.

However, if one is an action movie buff, the Killer Elite movie is a film that should be recommended as a rental or on demand purchase during those summer months between the conclusion of the professional basketball season and professional football season, assuming one is not a baseball fan.

Then again if one is a De Niro fan, then they might be better off dusting off an old DVD, such as The Godfather Part II or Casino, which are both tough guy classics.  It is not the worst movie currently in theaters, but is definitely not the best.  Furthermore, if you are pinching pennies like many are during this recession, your pennies will be put to better use somewhere else.

Nevertheless, the film will fascinate audience members slightly because many will not substantiate whether a British Elite Special Air Service or the Feather Men actually existed.