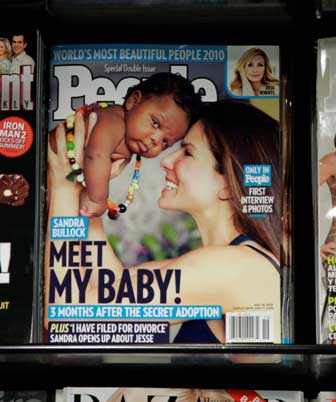 We’ve read the headlines: “Madonna adopts child from Malawi,” “Sandra Bullock adopts [Black] son” – and lest we not forget the multi-cultural adoption stir caused by Angelina and Brad Pitt. All fine performers, yes. But does that automatically make them suitable adoptive parents? Do these celebrities get a special “pass” to adopt? Given their busy lifestyles should they adopt at all? And if it is a Black adoption by a White family, are there ramifications for the child? If so, what are they? What are the challenges?

Regal Magazine conducted an unscientific survey regarding Black adoptions (translation = we asked a lot of folks…) and here are our findings: Surprisingly, unlike many of the Blacks surveyed, when questioned about Black adoptions among White parents, each White’s concern began first with the White parents’ abilities to teach the Black child his own heritage.

Says Mary, a White female in her early 40s: “I’m not sure it’s the right thing to do…Is it [Black adoption among White parents] really fair to the child who should know his true heritage? Can White parents help them in that regard?”

Sherrie, a mid-50s White female echoes that sentiment: “I have split feelings on the subject. It’s always a good thing for children to be adopted into a good home, but I think it’s important for White parents to give their Black children a sense of their culture and background.”

And Ann, a White female in her late 40s says, “I think if you adopt a child from another race or culture, you have the additional responsibility of making sure that the child understands where he or she came from and that he or she has an appreciation of the history and culture of their ancestry.”

All who responded to the survey agreed on one particular point, however: that there are far too many children ‘out there’ that are in need of good homes. According to a 2007 report, 130,000 children/youth in the United States were awaiting adoption. Of these, African American children represented 31 percent. At the end of that fiscal year, 22,922 “aged out” of the child welfare system but had no permanent placement. African American children made up 34 percent of that number.

It is because of such numbers that Joan, a late-40s Black woman stated, “I don’t care who raises the kids; somebody’s got to. If White people can do it, let them.” 20-something Tanya, a single Black mother agrees: “As long as it’s genuine [Black adoption] then I don’t see any problems with it.” And Adam, a 20-something White man said, “It doesn’t matter, nor should it matter, whether a White family adopts a Black child or a Black family adopts a White child…The only criteria which matters is whether the adopting family can love and care for the child.”

The reality is that Black adoptions, particularly when the Black child will be placed with a White family, come with additional challenges that makes it of utmost importance than simply “cultural pride.” For instance, Black children should understand that they are more susceptible to contracting certain diseases that plague Blacks more than members of other races. Heart disease, diabetes and a host of other medical concerns run rampant in the Black community. Of course, certain other features of such diseases factor into the outcome such as diet, lifestyle, etc. – and teaching Black children about such issues among Blacks is not limited to the White adoptive parents (far from it!); however, if White parents are blind to the dangers of their Black children, how will the child ever learn?

There are other cultural divides as well.

Years ago, I met a young White couple who adopted a Black child around the age of five. She was a doll baby – and they seemed to dolt on her. But it was clear that they did not have a handle on the “Black hair” issue; her hair was out of control. (We could pretend as if it doesn’t exist, but why?)

At a certain point in the conversation, the mother felt comfortable enough to share her own insecurities and turned to me and said, “I don’t know what to do with her hair.” Frankly, I was relieved. It was quite obvious to me that she had no clue what to do with “Black hair,” so I discussed specific methods and products that might benefit the child – the kind that would allow her to manage her hair and maintain her Blackness at the same time.

There’s also the “we-appreciate-who-he-is-but-are-still-going-to-change-his-name” syndrome among adoptive parents in Black adoptions. How many adopted children from far-off lands have had their name “Americanized” simply to assimilate into the culture, thereby diluting their own? When Kwame from Guyana comes to Cincinnati, Ohio, and Mr. and Mrs. Smith immediately demands that he answers to the name Timothy, there are potential problems on the horizon. However ignorant to the fact, it indicates a lack of respect for the child’s culture, upbringing and language.

Do celebrities get ‘a pass’ on the adoption list? With so many families waiting for years to adopt – how is it that they are able to expedite the process so smoothly? Of course, we have no idea how long the process has been in motion, but it makes one wonder.

And with their busy schedules and ongoing projects, how can they truly parent the child? True, many can afford live-in housekeepers and nannies, but is that truly being a parent? Some surveyed felt that simply because they were celebrities did not make them bad parents – but not necessarily good ones either. But one thing was clear: they support White celebrities’ in Black adoptions as long as the adoption is genuine and not some public relations ploy.

Linda, a 30-something Black female expressed it this way: “I admire the fact that Sandra Bullock adopted from the US…I think a US adoption is more important because our kids need the foundation and access here in our US soil.”

And Ann (mentioned earlier) said, “I don’t have a problem with them adopting as long as they have to go through all the proper channels and don’t get special treatment because of their fame or fortune.”

Says Cathy, a Black female in her mid-50s: “If adoption improves the life of a child, it doesn’t seem to matter…and everyone deserves to be raised by parents that love them. That’s the key…do they love the kids they adopt?”

Arlen, a Black male in his 50s responded: “…all children need love no matter who it may come from…as long as it is genuine and in the best interest of the child.”

When you think of it, with so many Black children waiting for someone to love them and whom they can love in return, such topics as “Black adoptions” should no longer be mentioned among us as a society.

After all, As Arlen (above) so aptly puts it: whatever’s ‘in the best interest of the child.’