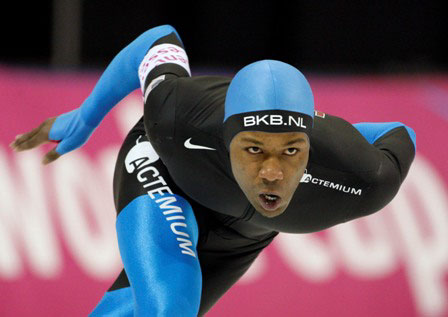 Olympic speed skating is often the province of Europeans and their North American descendants. African American Shani Davis, a product of Chicago’s Southside projects, has broken that mold and brought home multiple medals.

In 2006, Davis took home the Olympic gold in the men’s 1,000 meters and a silver medal in the 1,500 meters long-track speed skating events. He is scheduled to participate in five individual events in Vancouver this month. Shani and his mother, Cherie Davis, who is often by his side, did it their way against incredible odds.

“He has no coach, no training program, no team behind him,” Olympic short track speed skating champion and good friend Apolo Anton Ohno told Sports Illustrated. “He’s taking on guys with Tour de France budgets going for one or two races…”

“We believed when nobody else would,” Cherie told Ebony Magazine.

As a packaged duo, mother and son have fought their way to the top. Sparing nothing, the single mother “did what I was supposed to do” to catapult her son from Chicago’s South Side to Olympic gold. “I told him, ‘You just skate, and I’ll do all the fighting.’ That’s pretty much what we’ve done,” she says.

While working as a legal secretary, Cherie Davis lived frugally, driving a 1986 Volkswagen for 16 years, until Shani graduated from high school so that she could afford his tuition for Catholic schools and to cover expenses for his skating equipment, training and travel to competitions. By the time Shani Davis was 10 the family moved from a two-bedroom apartment on the South Side to a studio on the North Side to be closer to the skating club in suburban Evanston, where Shani Davis practiced almost daily.

“Those were tough times,” she said to Ebony. “I don’t know how we made it, but we made it. We just did it. Whenever we’d go to the competitions, it would be at least a $1,000 in expenses by the time you’d get through with the hotel and rental car. And there were lots of competitions.”

As the Davis family rose in the speed skating world, they shut out others to help Shani Davis focus on winning races. He rarely gives interviews and shuns team competitions to help give himself the maximum chance for personal success. “We would take things into our own hands and try to make the ideal situation for myself,” Shani Davis told Chicago Tribune Magazine in 2005. “In the long run it made me the strong person I am today.”

“When he doesn’t win he has nobody else to blame,” says Canadian skater Denny Morrison in Sports Illustrated. “I can blame a physio or massage therapist. He takes it on himself, and that makes him so motivated to fix it.”

But it was a mother’s love and her fiery spirit that steamrolled the barriers that tried to block her son from destiny. “Cherie is a role model for any parent wanting to know how to prepare a child to be a champion,” says Sanders Hicks, founder and president of the Evanston Speed Skating Club. A former speed skater himself, Hicks was Shani’s first coach and had as many as a dozen Black children speed skating at one time. “She got him to those meets on time and made sure he had the best equipment,” Hicks told Ebony.

African Americans often must overcome longer odds and sometimes have a more solitary lifestyle than their competitors. Cherie and Shani Davis have taken those situations and turned them to their advantage. We will see how that pays off this month in Vancouver.