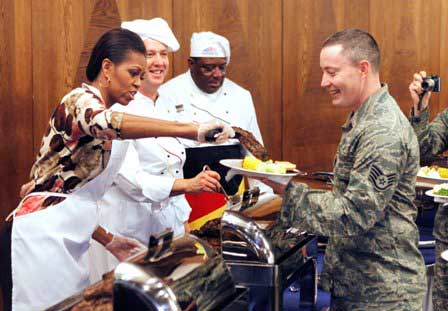 The famous expression, “behind every great man, there is a great woman” speaks volumes about the support and encouragement that women have provided to their men over the centuries.

This is not just a case of “standing by your man,” but also “standing up for what is right” and making a difference along the way.

Highlighted among the 10 women who are listed in our Top Celebrity Women, we ran the gamut from the wife of the president and the late wife of a slain civil rights leader to strong career women and legendary trendsetters.

Regal Magazine salutes an impressive group of women that you will rarely, if ever, see together. We felt it necessary for our readers to hold a torch to showcase “she-roes.”

Topping our list of top celebrity women is the lawyer, mother, author and advocate who is also married to the President of the United States. Michelle Obama has always been focused and as the First Lady, her focus on addressing obesity in children and encouraging more exercise among young people has hit a number of positive chords.

Second on our list of top celebrity women is billionaire philanthropist, talk show host and producer Oprah Winfrey who has taken the concept of branding and program development to levels unheard of for women of color and she continues to evolve.

A longtime friend of Oprah and a legend in her own right is Maya Angelou who holds the third spot and her poetic verse and commentary is motivational for men and women.

In the fourth spot, Halle Berry has proven that she is more than a pretty face. This Oscar-winning actress continues to broaden her performance base and deliver stunning performances on the big screen.

Serena Williams is fifth on Regal’s list of top celebrity women and she has evolved in her own right on the tennis court and in the business world while, at the same time, maintaining her own sense of style and self.

Our next group is equally engaging and multifaceted, which is a characteristic that our readers appreciate.  At number six, Jada Pinkett Smith also wears numerous hats. As actor Will Smith’s better half, Jada juggles the high demands of being a wife, actress, musician, executive producer, mother and now the support system for the emerging stars in her home – her children Jaden and Willow.

Our next two levels of top celebrity women are tied with true legends that set the tone for others. At the seventh spot, screen legends Lena Horne and Dorothy Dandridge whose histories as trailblazers is well documented as they used their brains, talent and beauty to break ground for Black women in Hollywood.

Tied at number eight are civil rights trailblazers, Dorothy Height and Coretta Scott King the wife of the late Rev. Dr. Martin Luther King Jr.  These women dedicated their lives to make America fulfill its mission of fair treatment for all and they both helped to keep Dr. King’s dream alive.

Entrepreneur Sheila Johnson holds the ninth spot and represents the new era of emerging business owner, philanthropist and sportswoman. Who said women cannot do it all and have men appreciate their efforts?

At number 10, our readers wanted to recognize all the women serving in the military for their courage, sacrifice and commitment.   They are tops and we salute them all!