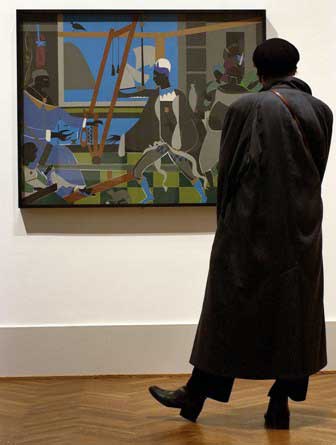 A woman looks at painting by Romare Bearden at 2003 exhibit entitled “A Century of Collecting African American Art.” (AP/Aysnley Floyd)

The Importance of Black Art Today: Seeking Diversity and Meaning in the Creative Process

Black art work has been making a comeback, but not in the traditional models that most people would identify with.  Paintings and sculptures by such noted Black artists as Henry Ossawa Tanner, Jacob Lawrence, Horace Pippin and Augusta Savage highlighted the beauty of the craft and their true genius, but not the degradation and disrespect they endured.

These masters of the art form overcame poverty and discrimination to bring creativity and beauty to the harsh world around them. By setting a standard for Black art work, the model itself was able to expand into other modes of expression.  It helped to usher in the resurgence of Black poets and writers who stood on the shoulders of Phyllis Whitney, Paul Lawrence Dunbar and Langston Hughes which created another Black art front.

This front brought relevant issues that impacted Black people to the forefront through their version of art, thus paving the way for Black playwrights Lorraine Hansberry and August Wilson.

According to Dr. Maulana Karenga, who is the Founder and Creator of Kwanzaa, “Black art must be for the people, by the people and from the people. That is to say, it must be functional, collective and committing.”

With the many facets of the artistic process that are available, the importance of Black art work is clear as it provides the reference point to foster self awareness, address social injustices and encourage action.

Karenga further asserts that, “Black art initiates, supports and promotes change. All art consciously or unconsciously represents and promotes the values of its culture. There is no better subject for Black artists than Black people, and the Black artist who doesn’t choose and develop his subject will find himself unproductive.”

Karenga, as a major player in the arts movement, joins an impressive list of writers, poets and social activists who have consistently driven home the message regarding the relevance of art and the importance of the Black perspective.  These artistic leaders include: Amiri Baraka, Larry Neal, Dudley Randal, Sonia Sanchez, Gwendolyn Brooks and Nikki Giovanni.

In most cases, their collective artistic works highlighted adverse social conditions or provided commentary on political activity. Their expression was not designed to provide pretty pictures to cover up the poverty and discrimination, but to emphasize the impact of these negative societal circumstances through their prose to encourage proactive change.

While historians will say that the Black arts movement faded away, it is safe to say that the rise in yet other forms of art and expression can be credited to the momentum of the movement. It inspired Black publications to showcase the writing and photographic work of Black artists such as Moneta Sleet and Black art museums to archive and display the works of Black innovators.

The art models of today are largely incorporated in musical trends including R&B and hip-hop, which can find their direct roots in jazz and Mississippi Delta blues.

Black art work is not a new trend, but a re-emerging one with a rich history that is deeply entrenched in modern thought and action. Grounded in the cultural and value principle of Black people, Black art work remains relevant as the outlet for creativity, artistry, advocacy and diversity showcasing the history and contribution of Black people who had been “invisible” in the record books of artistic accomplishments.