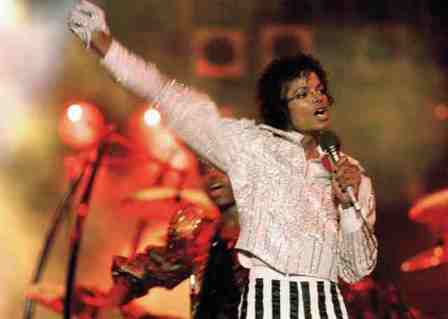 Michael Jackson performs with his brothers, The Jacksons, during the Victory Tour in July 1984/AP

Do you remember the time when seemingly every music fan loved Michael Jackson?  The self-proclaimed King of Pop, who first captured the world’s attention as the 11 year-old lead singer of the Jackson 5 in 1969, went on to sell 750 million albums and capture 13 Grammy awards.  His 1982 masterpiece, “Thriller,” is still the best selling album of all-time.

For over two decades the hits were endless.  Songs like ‘I Want You Back,” “Rock With You,” “Billie Jean,” and “Remember the Time,” became classics that are still often played today on radio stations across the world.

However, after 20 years of bad press from an ever-changing physical appearance to erratic behavior, health concerns, child molestation charges and financial problems, many critics have debated can Michael Jackson comeback?

In 2008, his brother Jermaine Jackson told the Australian Associated Press the much-anticipated Michael Jackson comeback would include his five brothers and sister, Janet, as the opening act.

“This has been a long time coming for the Jackson family to get back together,” Jermaine initially said.  “It is just the timing, so what we’ve been doing is working on the music and all the logistics.  It is going to be more like a family affair …”

However, Michael immediately dismissed those rumors, stating that he wanted to focus on his solo career instead.  “My brothers and sisters have my full love and support, and we’ve certainly shared many great experiences, but at this time I have no plans to record or tour with them,” said Michael.  “I am now in the studio developing new and exciting projects that I look forward to sharing with fans in concert soon.”

Apparently, the Michael Jackson comeback concert is in the works, as sources have reported that the former pop star will soon announce a string of 50 shows at London’s O2 Arena, which seats approximately 20,000.  Despite his past success, reportedly very few fans showed up outside his London hotel to greet the singer, and some that did stated that they were there only to obtain items that they could sell on eEbay.

“Because of what’s happened to him and how he’s lived his life over the last 20 years, he’s made it very difficult for people to out themselves as Michael Jackson fans,” said John Aizlewood, British music writer and broadcaster.  “These concerts are a huge opportunity for rehabilitation.”

Jackson, who has not released a full-length album or performed in concert since 2001, had recently been in the news for the auction of some of his memorabilia during the peak of his career.  The planned Michael Jackson comeback will take place in an arena known for reviving careers.  Britney Spears plans to play the O2 Arena in June, Prince held a much-hyped 21-day concert series there and Led Zeppelin also performed at the arena.

Whether the concert is a “Thriller” like past concerts, the latest Michael Jackson comeback will either make or break the rest of his career because like the old Jackson 5 hit song entitled, “Get It Together,” the former musical sensation must get his career together or music fans will completely leave his music alone.