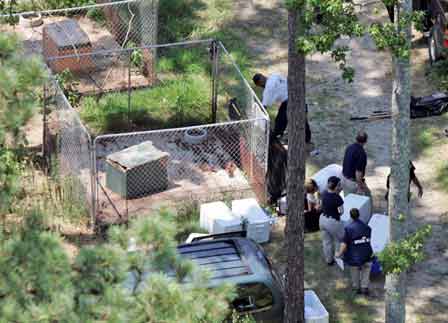 We have heard it all before.  High profile athletes accused of a heinous crime, convicted in the court of public opinion before receiving their due process.

When Vick entered the league as the No. 1 draft pick of the Falcons out of Virginia Tech it seemed as if he could do no wrong.  The excitement that he brought to the Georgia Dome initially crossed racial lines, as he brought all colors together while leading the Falcons to the NFC championship game in 2004.

However, when Vick began to struggle on the field he also began to struggle to regain the confidence of White Falcons fans.  Many White fans lobbied for former Falcons backup Matt Schaub to replace Vick, while African Americans in the Atlanta area faithfully supported their embattled quarterback throughout his polarizing career.

That support or lack of support has seemed to follow Vick as he prepares to face his toughest foe to date, the U.S. District Court for the Eastern District of Virginia.

According to the AP, Vick, and three other defendants, are charged with competitive dog fighting, procuring and training pit bulls for fighting and conducting the enterprise across state lines.  If convicted, the four defendants could face up to six years in prison and $350,000 in fines and restitution.

Almost immediately, organizations such as PETA and the ASPCA began urging NFL commissioner Roger Goodell to “sack Vick” for the entire 2007 season like he did with Adam “Pacman” Jones.

“We think they should do the same with Michael Vick,” said Don Shannon, an assistant director of campaigns for PETA.  “We don’t think that their ‘wait and see” attitude goes far enough.  If they suspend Pacman Jones, they can suspend Vick.”

NFL spokesperson Brian McCarthy quickly responded by saying, “We agree with them that dog fighting is cruel, degrading and illegal.  The alleged activities are very disturbing and we are extremely disappointed Michael Vick has put himself in that situation.

“We are having extensive dialogue with numerous groups and individuals including the ASPCA and are reviewing all of our options to deal with this as quickly as possible.”

Vick also allegedly gave permission to douse a losing a dog with water before electrocuting it.

Vick claims he rarely visited the home and was unaware that it was being used for a criminal enterprise.

Because of the charges, Nike has suspended the release of Vick’s latest signature shoe, the Air Zoom Vick V.  However, Nike has not dissolved their contract with Vick, instead choosing to let the matter play out in a court of law.

Despite still having some level of support from the NFL and Nike, Vick has lost the confidence of many Atlanta Falcons fans.  Support for Vick is usually drawn on racial lines, with a majority of White fans believing the Falcons should release Vick, while Black fans believe that Vick should receive his due process, according to an ESPN poll.

McCarthy added, “The activities alleged are cruel, degrading and illegal.  Michael Vick’s guilt has not been proven and we believe that all concerned should allow the legal process to determine the facts.”

Despite initially showing support, at REGAL press time the NFL ordered Vick not to report to Falcons training camp pending an investigation by the league.