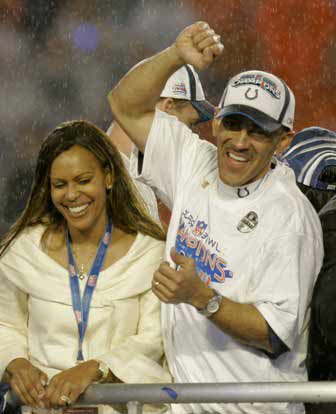 This One’s for Fritz

Do you remember where you were when Doug Williams destroyed the John Elway-led Denver Broncos in Super Bowl XXII in 1988?  Where were you when John Thompson led the Georgetown Hoyas basketball team to the national championship in 1984?

The late Fritz Pollard, the pioneer of Black athletic success must be ecstatic, knowing that none of his hardships and sacrifices went in vain, as Tony Dungy and Lovie Smith became the first Black coaches to lead their team to the Super Bowl.

“Somewhere up there, my grandfather’s got this big smile on his face, because for the first time in his life, he knows that no matter what the final score is, this is one game he can’t lose,” said his grandson Fritz Pollard III.

For generations, African American coaches and athletes faced discrimination in their efforts to even the playing field for future generations.  Many teams and colleges believed Blacks did not have the requisite intelligence and leadership abilities to be a coach or quarterback.

Despite the racial barriers, Frederick Douglas “Fritz” Pollard excelled on the playing field and the sidelines by becoming the first Black coach, quarterback and kicker in professional football while starring for the Akron Pros in 1921.

However, once professional football became a part of the American fabric, Black athletes and coaches were no longer welcome in a sport they had previously dominated.  The National Football League would go another 68 years before the Los Angeles Raiders hired Art Shell as the first African American head coach in the modern NFL era.

Although Shell’s tenure with the Raiders led to success on the field, his accomplishments did not immediately level the playing field for African American coaches.

Until Super Bowl XLI, no Black head coach had even participated in the big game.  That all changed when Dungy and Smith led their respective teams to the championship game in Miami, Fla.

Known as the “Soul Bowl” or “Brother Bowl” in the African American community, the success of the two best friends provided inspiration to many that you could achieve anything you want in life no matter what your skin color or hardships may be.

Tony Dungy and the Indianapolis Colts defeated Lovie Smith and the Chicago Bears in this historic game.

“I really have to dedicate this to some guys who came before me … It feels good that I was the one able to do it and dedicate it to those guys who paved the way for me.”

For Dungy, the victory had to be bittersweet after losing his son to suicide 14 months ago.

“The Lord doesn’t always take you in a straight line.  He tests you sometimes,” Dungy explained.

The Colts had always been labeled as an extremely talented team, but too soft to win the big game.

Critics doubted Dungy as a capable head coach because of his calm demeanor and Christian principles.  Many believed a soft-spoken coach could not lead a team to a championship.

He transformed the Tampa Bay Buccaneers from a laughingstock to a perennial playoff team, but was unable to lead them to a Super Bowl and was heading for a similar fate until the Colts defeated the Bears 29-17.

The Colts’ Super Bowl victory is resonating throughout Black America as being equivalent to Hank Aaron breaking Babe Ruth’s all-time home run record in 1974 or Cito Gaston becoming the first Black manger to lead a major league baseball team to a World Series victory in 1992 and 1993 with the Toronto Blue Jays.

For young children of all ethnicities and socioeconomic backgrounds, Dungy’s accomplishment on February 4, 2007 is a simple reminder that dreams do come true, no matter what the critics might say.

Far too many children of color have their dreams killed because no one has blazed the trail before them.  Many believe since no one from their environment or community has succeeded in a certain aspect of life that they will not be able to succeed.

However, because of Tony Dungy’s Super Bowl victory, there are children all across America believing that they can walk in the footsteps of this modern-day pioneer.

Moreover, somewhere, the first Black coaching legend is smiling, knowing that now his mission for African American football coaches is complete.  Here’s to you Fritz.