There’s a New Homerun King, and His Name is Barry Bonds 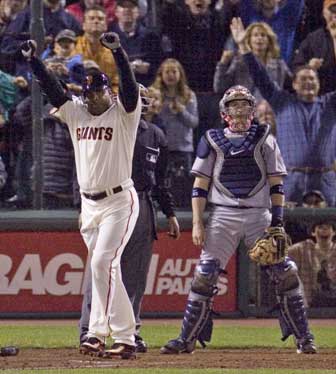 There’s a New Homerun King, and His Name is Barry Bonds

Take yourself back to April 1974, 10 years after the passage of the Civil Rights Act and exactly six years after the assassination of Dr. Martin Luther King, Jr.  African Americans were beginning to make gains in all avenues of life, and Hank Aaron was on the verge of becoming the all-time homerun king in a league that excluded Blacks until 1947.

Prior to Aaron’s assault on sports’ most sacred record, many still believed Blacks to be less than their White counterparts and were not ready for an African American to bump the beloved Babe Ruth into second place on the homerun list.

Hate mail began pouring in after the 1973 season.  One read:

You are (not) going to break this record established by the great Babe Ruth if I can help it…Whites are far more superior than jungle bunnies…My gun is watching your every black move.”

However, in April 1974 Aaron blasted a homerun off Los Angeles Dodgers pitcher Al Downing and cemented himself as one of the all-time greats of the game.

During the 2007 baseball season, San Francisco Giants slugger Barry Bonds found himself in the middle of similar controversy, receiving hate mail and verbal threats as he neared Aaron’s all-time record.  However, Bonds received hate mail because of the color skin and for allegedly of using performance-enhancing drugs.

Aaron who was also absent for the historic event released a taped statement.

“I would like to offer my congratulations to Barry Bonds on becoming baseball’s career homerun leader.  It is a great accomplishment, which requires skill, longevity and determination.  Throughout the past century, the homerun has held a special place in baseball, and I have been privileged to hold this record for 33 of those years.  I move over now and offer my best wishes to Barry and his family on this historical achievement.  My hope today, as it was on that April evening in 1974, is that the achievement of this record will inspire others to chase their own dreams.”

Rumors circulated that Aaron would not attend any of Bonds’ games because of the allegations surrounding the new record.  Many in the baseball community have also questioned the legitimacy of the new record.

“I don’t think it’s going to diminish what Hank Aaron accomplished.  I think he’ll always be known as the guy, because of the allegations and stuff.  I think people will always consider him the legitimate homerun king,” said the legendary Ozzie Smith.

Despite the controversy, and his lack of popularity amongst fans outside of the Bay Area, Bonds maintains he never knowingly took steroids and that the new record is completely legitimate.

“This record is not tainted.  At all.  At all.  Period.  You guys can say whatever you want,” Bonds said.

According to writer Ken Davidoff, all records are a product of their time.  For instance, Babe Ruth only played against White competition.  Hank Aaron played nine seasons in hitter-friendly Atlanta-Fulton County Stadium while Willie Mays spent 12 seasons hitting into the mighty winds of Candlestick Park.  Moreover, Bonds played in an era when many were abusing performance-enhancing drugs.

Furthermore, how should historians view Barry Bonds and the new homerun record?  Is the record tainted because of the steroid allegations?  How much has race played a factor in the way the media and fans treat Bonds?  Will baseball fans ever adore him the same way they adore Ruth, Mickey Mantle or Mays?

Unfortunately, for Aaron, it took 33 years to get the admiration he deserves from baseball fans.  Will it take as long for Barry Bonds to receive that same admiration from the fans?