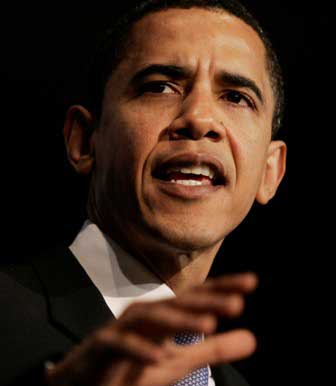 Do you remember Jesse Jackson’s run for the Democratic presidential nomination in 1984 and 1988?  Do you recall the hope and pride that filled the streets of the African American community during Jackson’s two campaigns?  Streets filled with the chant, “run Jesse run.”

That same hope has been reborn with the announcement that Illinois Senator Barack Obama will make a run for the White House in 2008.

Many have compared Obama’s bid for the White House to John F. Kennedy’s election in 1960. At the time, many critics did not believe that the American public would elect a Catholic to the run the Oval office, but his victory over Richard Nixon captured the imagination of the American public, and started a love affair between Americans and the Kennedy family.

However, the presidential hopeful has also faced intense criticism from the African American community for not being “Black enough,” and from conservatives for his lack of experiences on many foreign and domestic issues.

“I think he needed to know a little more about health care issues and he was just unprepared,” said Daniel Romo, 45, a member of Service Employees International, sponsors of the forum.

Despite criticisms of his health care plan, supporters praise Obama for his plan to get troops out of Iraq, beginning with a drawdown in May that would last until next March.  However, many critics believe that plan is virtually impossible because President George W. Bush plans to veto any bill that calls for the withdrawal timetable.

Although Obama has discovered that support in the Black community is not guaranteed, he has picked up an endorsement from Black Entertainment Television co-founder Sheila Johnson, despite the fact that her ex-husband Robert Johnson is endorsing Clinton.

However, the majority of African Americans in Long Island, New York support Clinton who has a long history of supporting causes that are important to them such as health care, education, and affordable housing.

Despite Clinton’s popularity in Long Island, her 40-point lead among African Americans is gone and now Obama has an 11-point lead, according to a poll conducted by ABC News and the Washington Post.

“Both of these candidates have enormous potential to offer, not only to the Black community, but to the country at large.  Not everyone in the African American community is always of one mind, but it’s clear that the African American vote will be critical and crucial as it has been in the past three presidential elections,” said civil rights attorney Fred Brewington of Hempstead, New York.

On the contrary, many conservatives recently blasted the senator for his membership in a Black activist church that preaches a “Black Value System.”

Obama received criticism for distancing himself from the pastor Rev. Jeremiah Wright, Jr., who has supported Louis Farrakhan and Moammar Gadhafi in the past.

Regardless of the outcome of the election, and the political pressure that Obama has endured over the recent months, his campaign has lit a fire across America, and not just Black America.

Voters see a confident and charismatic leader that they can envision leading America in a new direction in 2008.  Furthermore, his success can lead to an entire generation of young Americans changing the course of this great nation for the near future.

Cornelius is a writer for Regal Black Men’s Magazine.