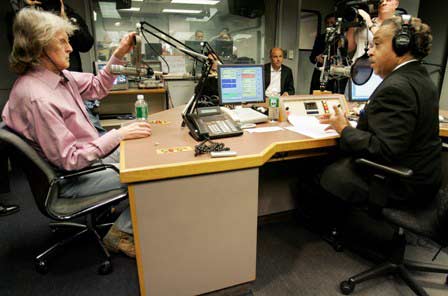 Is hip-hop the blame for Don Imus’ “nappy-headed hos” description of the Rutgers women’s basketball team?  The popular shock jock was recently fired by CBS radio and MSNBC for his sexist and racist comments about the Black women on the Rutgers basketball team that reached the Final Four in April.

“It seemed like (Sharpton) terrorized broadcast executives.  It seemed like they were in a fetal position under their desk sucking their thumbs on their Blackberrys, trying to coordinate a response,” said Imus’ producer Bernard McGuirk.

More importantly, how could anyone make such stereotypical comments about a group of intelligent and talented women who displayed perseverance and determination during their unlikely run to the championship game?

Imus said rappers use worse language to “defame and demean Black women” and call them “worse names than I ever did.”

Although Don Imus’ comments were hurtful and offensive to many, it has opened up a discussion within the rap community in an effort to eliminate the sexist and misogynistic lyrics that are pervasive throughout the entire hip-hop community.

Since the Imus controversy began, celebrities from Russell Simmons to Oprah Winfrey have hosted panel discussions to address the affect that hip-hop has on the treatment of women and its subsequent affect on the entire African American community.

Simmons recently called for a recording and broadcast industry boycott of the b-word, ho and the n-word.  His attempt to ban these words from the public airways has received mixed emotions.

According to the Associated Press, a discussion panel entitled, “Does Hip-Hop Hate Women?” drew a crowd of over 400 people.

“We allow this language to go on.  As a community, we aren’t responsible for our children.  So we don’t teach our little boys how to grow up to be men and respect women.  We allow them to learn from the streets what’s acceptable,” said Amina Norman-Hawkins, a Chicago emcee and executive director of the Chicago Hip-Hop Initiative.

Dr. Michael Eric Dyson criticized rappers for the double standard they use when judging Black women.

“They romanticize their mothers and revile their baby-mothers.  That’s a big part of what this phenomenon is about, a lingering crisis for Black men about the image and vision of the women in their lives.  It’s ‘Oh my mama, blah-blah-blah!’  Then without irony, they find themselves saying terrible things about the women who brought their children into the world,” he said.

Hip-hop icon Snoop Dogg has been at the center of the storm for his misogynistic lyrics that have long faced criticism by African American women.

Snoop answered his critics by stating, “(Rappers) are not talking about no collegiate basketball girls who have made it to the next level in education and sports.  We’re talking about hos that’s in the ‘hood that ain’t doing [expletive] that’s trying to get a n**** for his money.”

Regardless of the result, the Don Imus controversy brought much-needed attention to sexism throughout the world, including the hip-hop community.  R&B sensation Joe put it best in his hit song, “What if a Woman.”  What if women treated men disrespectfully?  Would similar forms of disrespect offend men?  If so, how does one justify disrespecting the mothers of society in the same way?

Cornelius is a writer for Regal Black Men’s Magazine.