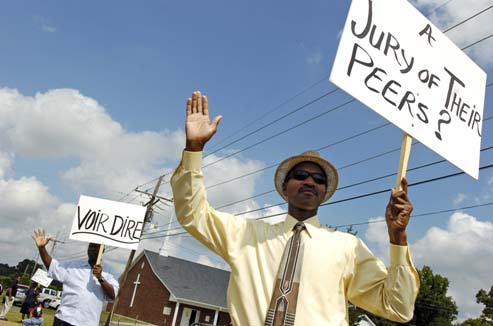 It was the spring of 1931.  A freight train bound for Memphis carried a group of young African Americans in search of a better life.  They were desperately trying to escape the future that awaited them because of the color of their skin.

Despite knowing the grim realities that came with their dark complexion, the young group of African Americans on that freight train that day in March 1931 was still optimistic about the opportunities that awaited them in Memphis.

However, at a train stop in Stevenson, Ala., a young White man claimed that a group of Blacks had tossed him from the train.  The sheriff in nearby Paint Rock, Ala ordered officers to arrest all African Americans onboard.  When the train stopped, only nine African American men and two White females were onboard.

The two White females claimed the young Black men had gang raped them, and they were arrested on the spot  Eight of the nine men were convicted and sentenced to death with very little evidence to suggest they were guilty of any crime.

Eventually, one of the alleged victims recanted their story, saying that they were prostitutes who were trying to escape charges of vagrancy.  The judge dismissed her story and convicted the Scottsboro Nine.  On appeal, the Alabama Supreme Court upheld the convictions.

Throughout the history of the Jim Crow South, injustices were commonplace.  From Emmett Till to the Mississippi burning incident, equal justice for Blacks was completely unheard of throughout the southern region of the country.

However, as time has gone by and the South has become integrated, politically correct Americans have prided themselves on the abolishment of racism and discrimination.  Ask a specific demographic if racism still exists and the answer is always an emphatic “no.”  Ask them about the Jena Six, and see if that answer is still as emphatic as before.

“There are a lot of places in the Deep South where (almost) nothing has changed aside from the fact that segregation isn’t legal,” said Mark Potok, director of the intelligence project for the Southern Poverty Law Center in Alabama.

In December 2006, an African American student asked the principal for permission to sit at a “White-only” tree in the courtyard of Jena High School in Jena, Louisiana.  The principal responded by saying that the student could sit anywhere he pleased.  The next day students found three nooses hanging from the “White-only” tree.

Race riots followed, culminating in a schoolyard fight that resulted in six Black teens charged with attempted murder for beating up a White teen who suffered no life threatening injuries.

The Black community of Jena was outraged.  Prior to the fight at Jena High school, a Black teen had survived a vicious attack for attending an all-White party.  In addition, a White youth had recently pulled a shotgun on three Black teens at a local convenient store.  According to CNN.com, the White kid who beat up the Black party crasher faces charges of simple battery and the thug who pulled a shotgun faces no charges.

CNN.com reports that in the convenient store incident, the three Black teens were actually arrested and accused of aggravated battery after grabbing the gun—in what they call self-defense.

Despite the recent racially charged incidents, city official believe race is not an issue in any of these incidents.

“Race is not a major local issue.  It’s not a factor in the local people’s lives,” said Mayor Murphy McMillan.

After protests erupted at the school and in the community, District Attorney Reed Walters told the Black students who were protesting under the “White only” tree that he could “end their life with a stroke of a pen.”

His words proved prophetic after the Jena Six were arrested and charged with attempted murder although the victim, Justin Barker, 17, was released from the hospital after two hours for a concussion and swollen eye.  Barker even attended a ring ceremony later that night, where friends say he was his same jovial self.

The District Attorney added, “I will not tolerate this type of behavior.  To those who act in this manner, I tell you that you will be prosecuted to the fullest extent of the law and with the harshest crime that the facts justify.  When you are convicted, I will seek the maximum penalty allowed by law.  I will see to it that you never again menace the students at any school in this parish.”

Mychal Bell, the first of the six to face a trial, will learn his fate this month.  According to the Associated Press, an all-White jury on reduced charges of aggravated battery and conspiracy to commit it convicted Bell.  He faces up to 22 years in prison.

“Can they really do this to me?” Bell asked from his jail cell.

Like the Scottsboro case in 1931, the Jena Six has received support from activist groups such as the NAACP and ACLU.

Al Sharpton recently organized a demonstration in the central Louisiana town to protest a justice system that has “one rule for White kids and one for Black kids.”

According to local residents, Jena is a town divided by race.  The town of 3,000 has only 350 African Americans.  Most Blacks live in the impoverished Ward 10, while Whites live in a section of town known as “Snob Hill.”

When a Black teacher was able to purchase a home in the predominately-White “Snob Hill”, local real estate agents refused to show him a “White” property even though several were advertised in the local paper, according to CNN.com.

A young African American with a business degree was unable to get a job as a bank teller despite his qualifications.

The racial lines and caste system in Jena is evident and it was only a matter of time before all of the tension exploded.

“The White kids should have gotten more punishment for hanging nooses.  If they had, all of the stuff that followed could have been avoided,” said Melvin Washington, the lone African American on the school board.

Despite the negative attention that has recently invaded Jena, injustice along racial lines is still commonplace in American society.

According to the Urban League, Black men are three times more likely than White men to face jail once they have been arrested.  Over 24 percent of Blacks arrested in the U.S. in 2005 ended up in jail compared with 8.3 percent of White men.

As Bell awaits his sentencing, and the remainder of the Jena Six await their fate, ask yourself is racism extinct from American society.  Sometimes people will have you believe that everyone gets along despite physical differences, and those claiming racism are simply playing the race card to their advantage.  The next time you hear this excuse, think of the Jena Six and ask yourself, have we come as far as we think we have?

To send donations to the Jena Six and/or sign the petition, visit www.leftturn.org.