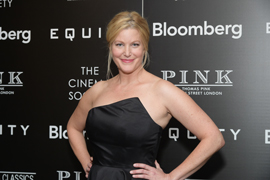 Actress Anna Gunn attends a special screening of “Equity,” hosted by The Cinema Society and Bloomberg, at the Museum of Modern Art on July 26 (Photo Credit: Evan Agostini/Invision/AP).

The Other Gender Equality Battle

In corporate America, even those women who have climbed the ladder of success still have to fight for equal respect and equal luxuries in life that many men might take for granted.

“Equity,” is a timely and cutthroat film about the harsh realities that women endure in the business world, despite their talent, work ethic and sacrifices.

Naomi Bishop (Anna Gunn, “Breaking Bad”) is not afraid to say that she like money a lot.

She makes the right calls, most of the time.

Although work takes up most of her hours, she still manages to take care of the needs in her personal life.

Her beau, Michael Connor, is in the same business.

However, she manages to erect a wall of privacy when it comes to business secrets.

Although her company is downsizing, Naomi, who is seeking a promotion, manages to save her job and the job of her dedicated subordinate Erin Manning (Sarah Megan Thomas).

Despite the success of Naomi and Erin, they seem to be fighting battles that their male colleagues are immune to.

And Erin is trying to climb the corporate ladder, while hiding her pregnancy.

The job calls for total dedication.

But how can Erin give the job her all if she has a child to raise in the process?

In “Equity,” the entire financial industry has cooled to the talents of Naomi.

She undervalued the IPO for DynaCorp, and few have faith that she can handle the account for Cachet, a company that specializes in privacy for social media networks.

“Equity” is the story of backstabbing and betrayal, but from a woman’s perspective, in a corner office of a New York City high rise.

“Equity” gets off to a brutally slow start.

The climax of “Equity” is what saves it from being a good and timely idea to a pretty decent film.

It is extremely educational for some men who might not empathize with their female counterparts by putting themselves in their position.

The acting is good.

Filmmakers do a good job capturing the beauty and essence of New York City and the Bay Area as well.

“Equity” also captures the unwanted advances men make towards women who are only trying to do their job.

The advances contribute to the lack of respect some women might feel in corporate America.

With the Robert Ailes sexual harassment controversy at FOX News and Hillary Clinton’s historic presidential bid, “Equity” is very appropriate for the times.

While the film has its shortcomings, hopefully it does its intended job of enlightening people who might take for granted all that women have to endure to follow their dreams and ambitions.