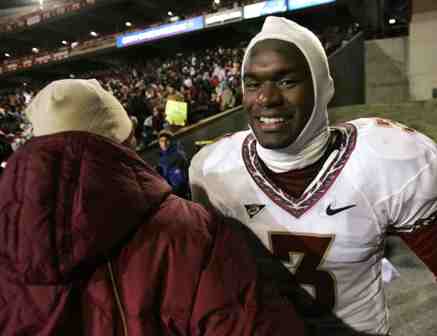 Every now and then an individual comes along that makes one proud of the kind of role models that still exist in today’s society.  For too many American youth, the only role models one sees, which they can relate to, are only able to excel in the field of athletics and entertainment.  As a result, many disadvantaged children see the only means to status and influence is with a ball or a microphone in their hand.

However, former Florida State University safety Myron Rolle always saw athletics as extracurricular.  The standout Seminole football player became a star on the gridiron but become a mega-star in the classroom, as he was awarded the internationally acclaimed Rhodes Scholarship to pursue a graduate degree in medical anthropology from Oxford University.  With millions of dollars awaiting him if he declared for the 2009 NFL Draft, the pre-med major who completed his undergraduate degree in two-and-a-half years had to make a difficult decision.

“We’re expecting Mr. Rolle to join us at Oxford,” said Colin Lucas, warden of the Rhodes Trust after Rolle received the prestigious Rhodes Scholarship.  “He hasn’t given any indication he won’t.”

Consequently, on January 13, Rolle made his decision official.  “I’m very excited to go,” said the Rhodes Scholarship recipient in a text message to the New York Times.  For the youngest generation of African Americans, Rolle becomes the latest role model for them to emulate as countless of African Americans are proving that academics could pave the way to fame and fortune in the same way that athletics can.

Rolle will attend Oxford University on a Rhodes Scholarship for one year and enter the 2010 NFL Draft.  What makes his decision even more remarkable is that many scouts had predicted Rolle would be among the first 49 players selected in this year’s draft, which would guarantee him millions of dollars.

The superstar student became a household name when he missed the first half of Florida State’s contest against the University of Maryland to attend the Rhodes Scholarship announcement ceremony on November 22, returning to a thunderous ovation and enormous media attention for the second half of the Maryland game.

Somewhere, former New Your Knick Bill Bradley is probably beaming with pride over Rolle’s decision.  In 1965, Bradley faced a similar dilemma as he contemplated pursuing his graduate degree at Oxford or entering the NBA Draft.  Already possessing an Olympic gold medal for basketball, Bradley chose to study at Oxford before joining the New York Knicks and helping them win two NBA championships during his distinguished career, proving that a successful career in professional sports is still possible for the former Seminole.

Upon retirement, Bradley became an admired senator from New Jersey, Rolle’s home state.  Conversely, Rolle plans to use the money earned from his future professional career to enter medical school with plans of opening health clinics in his parent’s native country, the Bahamas.

Wherever the future leads Rolle, it is sure to lead to success and admiration because he is already widely admired for his exploits on the football field but most importantly because of his excellence in the classroom and as a Rhodes Scholarship recipient.