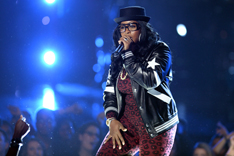 Sure Nicki Minaj is a great talent, but she might not have what it takes to battle Remy.  Honestly, most male M.C.’s would crumble under the weight of Remy’s words.

Terror Squad artist Remy Ma released a brutal diss record entitled “Shether,” based on the classic Nas diss record (“Ether”) aimed at Jay-Z to pick apart everything pertaining to Nicki from the fake to the factual.

While Ice Cube’s “No Vaseline” and 2Pac’s “Hit ‘Em Up” still hold the title of best diss songs of all time, “Shether” has to be the best ever by a female rap artist.

The question becomes what other female diss records can even be considered in the same league as “Shether?”

“Shether” by Remy Ma—According to Rolling Stone magazine, the beef between Remy Ma and Nicki Minaj goes back to 2007 with Nicki’s mixtape track “Dirty Money.”  Rumors surfaced that the two had a deeper and more personal relationship than just rap competitors.  In songs with Gucci Mane and Jason Derulo, Nicki talked about someone not selling many records and the fact that she was the queen of rap.  However, Remy took offense to that accusing Nicki of selling out to get her record deal and getting played financially because of a 360 deal, which allows the label to get a percentage of all earned income from record sales to concerts and merchandising.  Remy rapped, “And stop talking about numbers, you signed a 360 deal through Young Money, through Cash Money, through Republic, which means your money goes through five n***** before you touch it.”

“Roxanne’s Revenge” by Roxanne Shante—In the 1980s, the Roxanne saga was like R. Kelly’s “Trapped in the Closet” chapters.  It was a great idea at first but got old really quickly with all of the copycat diss records.  Rap group UTFO and producers Full Force had a hit in 1984 with “Roxanne, Roxanne.”  But after UTFO reneged on a concert, teenage rapper Roxanne Shante dissed them with the song “Roxanne’s Revenge.”  Roxanne Shante dissed Doctor Ice of UTFO by saying, “Well, let me tell you somethin’ else about the doctor, too: He ain’t really cute, and he ain’t great, he don’t even know how to operate.”

“Payback” by Choice—Choice had to be a bad sister to diss people on her own record label (Rap-a-lot Records) like the Geto Boys.  Not only did she attack artists on Rap-a-lot, Choice attacked every misogynistic male rapper from N.W.A to Too Short on the song “Payback.”  Choice compared Bushwick Bill of the Geto Boys to Tattoo, the little person from the TV show “Fantasy Island.”  She dogged Dr. Dre for his feminine attire during his World Class Wreckin’ Cru days and his close relationship with D.J. Yella, called Ice Cube’s mother out of her name and talked about the lack of hair on Willie D’s mother’s head.  Choice told Willie D of the Geto Boys, “I see you talking around town about how bald head girls ain’t nice, when your momma can’t even roll her hair with rice.”

“What’s Beef?” by Trina—A little over a decade ago, Khia took offense to Trina and Jackie-O calling themselves the Queens of the South.  Rumors also circulated that Khia was jealous of Trina for dating Lil Wayne.  What resulted was an epic beef in which both female emcees got their licks in on the other.  In “What’s Beef?,” Trina took a sample from The Notorious B.I.G. and went to work.  Trina accused Khia of going after her leftovers in the dating game and even copying her left over hits.

“Hit Her Up” by Khia—Many battles in hip-hop have a clear-cut winner, but Khia’s beef with Trina and Jackie-O might have actually been a draw.  The beef started with Jackie-O and Trina calling themselves the Queens of the South.  It intensified when Trina started dating Lil Wayne.  While Trina sampled Biggie in her diss, Khia sampled Biggie’s nemesis, 2Pac.  In “Hit Her Up,” Khia said, “Now all this talk about Jackie-O being the queen of the south, yeah you a queen, a drag queen.”