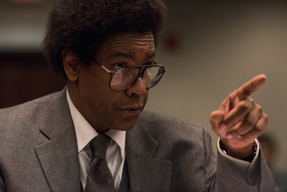 Proverbs 22:6 states, “Train up a child in the way he should go: and when he is old, he will not depart from it.”


However, according to Academy Award winning actor Denzel Washington (“Glory” and “Training Day”), there are not enough strong father figures in the Black community to teach their children that a life of crime is not the life that Black men should lead.

In an interview with TheGrio.com, Washington said that the system was not to blame for crime in the Black community.

Washington stated that if parents would properly raise their children, many would not turn to bad role models and a life of crime.

“It starts in the home,” Washington said while promoting his latest movie, “Roman J. Israel, Esq.”

It seems that there are facts to back up Washington’s perspective regardless of race.

While the negative effects of fatherless homes are universal and apply to every race, the number of Black children growing up in single parent homes is higher than other races.

According to Politifact.com, 67 percent of Blacks, 53 percent of American Indians and Native Alaskans, 42 percent of Hispanics and 25 percent of White children grew up in single parent homes.

It is important to note that growing up in a single parent household does not mean the home consisted of a single mother as opposed to a single father or that the fathers were not involved at all in the lives of their children.

“It starts with how you raise your children,” Washington added.  “If a young man doesn’t have a father figure, he’ll go find a father figure.  So you know I can’t blame the system.  It’s unfortunate that we make such easy work for them.”

However, statistics show that African-American defendants often get harsher sentences than their White counterparts for similar crimes.

According to ABC News, “The commission’s analysis of demographic prison data from 2012 to 2016 found that Black men serve sentences that are 19.1 percent longer than those for White men for similar crimes…

“When accounting for violence in an offender’s past, Black men received sentences that were on average 20.4 percent longer than that of White men, according to the commission’s analysis of fiscal year 2016 data, the only year for which such data is available.”

Nevertheless, the legendary actor sees hope for the future of the Black community because of the dedication of those in the community to make things better for the next generation.

While speaking to a group from Columbia University while filming the classic 1992 film “Malcolm X,” Washington had become a cynic.

However, he found hope in the fact that the students were determined to make positive change in the Black community.

“So I pray that young people never lose that fire, I don’t think they will.  And needless to say there’s a lot for them to work on.”