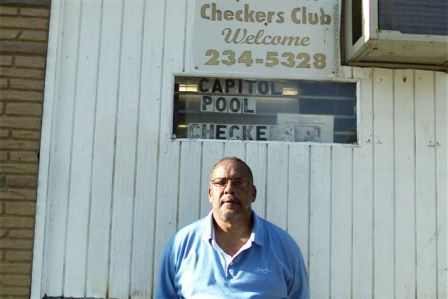 Donald Cunningham has turned playing checkers into a way to mentor young adults in the nation’s capitol.

When one thinks of playing checkers, they usually conjure up images of playing the popular board game with a sibling or friend.  A game that was competitive only because bragging rights were on the line, not a serious competition.

However, playing checkers has never been that simple and many people, especially African Americans, competitively compete in this famous board game with much more on the line than just bragging rights.  Adjacent to the New Bethel Baptist Church in northwest Washington, D.C., since 1985, many African American men continue compete in an old brick building called the National Capitol Pool Checkers Association.

This is where Donald “Pressure Man” Cunningham hones his skills.

Not long ago, a national tournament was held at the Four Points Sheraton Hotel in New Carrollton, Maryland.  The four day competition in Ballroom Salon A, featured checker players from around the world, including Russia.  Two players competed at each table.  “Every year, we conduct the national tournament in a different city,” said Stoney Burke, public relations director for national tournaments.  Depending on the category one competes in, between $160-$320 and first place trophies are awarded to the winners after each tournament.

As the competition grew near, Cunningham was eager to get started.  In the first match, he challenged 70-year-old Atlanta native, George Few.  Before anyone had moved a checker, Few called Cunningham, “the dangerous one.”   During the contest, sweat continuously dripped from Cunningham’s forehead.  He got up to get a paper towel. “My move when I come back right?” he said. Few nodded in agreement.  Before the action resumed, Cunningham put his glasses on.  Both men were deeply concentrating, as the onlookers stood by.  Cunningham lost the first game, but had a draw in the second match. “He’s tough, he just made mental errors,” said Few of Cunningham.

The next challenger hailed from Zenia, Ohio.   Avie Sharp had been playing checkers for 50 years.  “The challenge is the motivation and you develop your mind,” Sharp said.  With five checkers apiece on the board for both contestants, it was several minutes before either one made a move. In a game of cleverness and deep thought, playing checkers is the battle of the minds.  A lack of concentration and moving too quickly in the game caused Sharp to lose and draw to Cunningham.  Throughout the contest Cunningham admitted that he had a migraine headache, along with a head cold, which disrupted his concentration, while getting beat, off and on.  “If I wasn’t sick, the outcome would’ve been totally different,” he assured.  John Curtis, president of the Baltimore Checkers Association, has known Cunningham for 13 years. “Win, lose or draw, Cunningham is an expert in drawing a game,” Curtis told Regal Magazine.  “He’s the best draw game artist in the country.”

Last year, Cunningham, 62, won a trophy for his association.  The contest between Washington, D.C. and North Carolina is held every summer at Haines Point, a popular waterfront atmosphere in southwest Washington, D.C.  Whoever wins the trophy retains it for a year. Cunningham played a 14 game set in one day, with one opponent.  Down the road, he envisions better days, and intends to perform exceptionally well at the 2010 national tournament in Durham, North Carolina.

The motivation to compete in playing checkers started at age 12, when Cunningham observed his parents, Thomas and Evelyn, competing. He thought the game was intriguing.  One day, he politely asked his mother could he play her.  His mother beat him the majority of the time.  When he matured, he’d defeat his mother.  As a defensive end and track star at Phelps Vocational High in the mid 1960s, Cunningham wanted to outplay his oldest brother, Tyrone. The same mental approach he utilized in football, he exhibits in playing checkers.  “We are tight, he always wanted to keep up with me, and in every sport, he has done well,” said Tyrone, a retired postal worker.

At 25, Cunningham became more intimate with the checker game.  He competed on street corners throughout the nation’s capitol. The competition occurred on tables, the rooftop of cars, and on the knees of two players, which became a table. At times, he’d challenge the young and old in a game of checkers, with soda tops or rocks. “Checkers have come a long way,” he says. Within a 15 year span, he earned the nickname, “Pressure Man.”  Charles Johnson, a fast checker mover, understands why Cunningham earned such a nickname.  “He has a knack to get out of traps and drawing the game is key,” explained Johnson, a 20-year checker player.  A draw is when neither player wins.

When describing the game of checkers, Cunningham responds like a philosopher of the sport.  “You must know where every checker is going, one must have patience, it’s a mind game, and moving the checkers forward, cutting off the opponents’ tracks and lines is essential.”  Throughout a seven day week, he plays checkers at least four days, between four to nine hours.   Even in defeat, Cunningham comes back, time and time, again.   He demonstrates the will to win.   Employed with Pride Incorporated, under former Mayor Marion Barry, Cunningham supervised ex-offenders from 1967-1969. He introduced the game of checkers to all ex-offenders that came across his path.  At the Department of Public Works in Washington, D.C., he was nominated the second best checker player in his division.   Winning at national tournaments, spectators and association competitors have betted on Cunningham.  “Oh yeah, we’ve bet over $25,000.00 on Cunningham to win, says,” Tal Roberts, a junior master checker champion.

Cunningham works for the Maryland National Capitol Park and Planning Commission as a part time custodian now.  Humbly, he says, “If I ever receive an email or phone call requesting a workshop to teach the fundamentals of playing checkers, I would jump on the opportunity without hesitation.”  Kids nowadays are not playing checkers correctly, according to Cunningham. “The correct method in playing checkers is moving forward and backwards- Spanish pool.  If you touch a checker, you must move that checker.”  Teaching kids properly is a burning desire for Cunningham.  For the last three summers, Cunningham has participated in the annual Seat Pleasant Junior Checker Championship, held outside on the basketball courts in Holly Park, where a total of 1500 youngsters have attended.  Whoever beats the most people is the winner.  Cunningham, an instructor, is very instrumental in helping kids with their moves and teaching them how to add and subtract.   Johnny “Cool” Coleman, the founder, can attest to that.  Kevin Williams, 14, a first place winner and competitor since age 10, remembers Donald “Pressure Man” Cunningham well.  Williams said, “I appreciate the mentoring and knowledge from Mr. Cunningham, and I still play today, at least six times a week with friends and family members.  He would always tell us, ‘never leave a gap, keep the checkers close together, don’t get close to the board, sit back and observe the entire board.’”

That mentoring of young people has proven that playing checkers can be more than just a game.  The hard work and dedication that comes from playing the best and trying to become the best can be something that transfers from the board game to the game of life.

Wilson is a contributing writer for Regal Black Men’s Magazine.