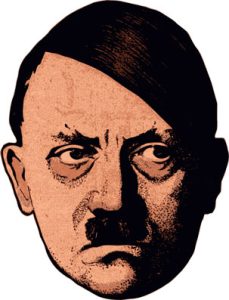 Many Houston area neighborhoods have become littered with racist literature, some with images of Adolf Hitler.

A third Houston community became inundated with racist literature over the weekend.

The Cinco Ranch community in Katy, Texas got peppered with racist flyers, with the Aryan Freedom Network’s website printed on them.

According to Claire Goodman of the Houston Chronicle, “Cinco Ranch neighborhoods are among the latest to be inundated with racist flyers. At least three neighborhoods have reported that flyers promoting White supremacy were distributed to homes during the early hours of (April 4).

“Similar acts have occurred in the Heights and Atascocita areas, leaving residents shocked.”

The Heights is located in north Houston.

Atascocita is located in Humble, Texas, which is in northeast Harris County, Texas.

When Craig Moseley, 67, walked outside on April 4 to collect his newspaper, he noticed a plastic bag with some paper inside the bag.

Rocks placed on top of the bags made sure the bag stayed weighted down to the ground.

Opening the bag, Moseley discovered a flyer that contained an image of a smiling dog, with the words “I love being white” at the top of the flyer, with the website for the Aryan Freedom Network at the bottom of the flyer.

When Mosley went to his Nextdoor app, a social media app that helps people stay informed with the happenings in their area, he found out that others had experienced similar situations with racist literature.

Mosley said, “There were tons of posts by my neighbors and some surrounding areas with similar notes. People are very upset.”

He said that although one neighbor has video footage of someone placing the racist flyer on their driveway, the video does not clearly capture the person’s face or the license plate number of their vehicle.

On Nextdoor, Diane Smith wrote, “The thugs that threw the bags with racist material weighted down with rocks in the Oak Park Trails driveways were driving a white pick-up. We picked up many on our street and threw them in the trash. We don’t want you in our neighborhood!!!”

Natalie G responded on Nextdoor, “Jerks did the same thing in my neighborhood night before last around 2 am. Same vehicle. I hope they get caught.”

The Houston Chronicle reported, “Perhaps the most significant unifying factor is the emergence of a white truck as the perpetrators’ apparent vehicle of choice for distributing the (flyers). One Heights-area Nextdoor.com user posted video of individuals seemingly throwing baggies from a light-colored dual cab truck on the night of a large scattering of racist materials around 11th and Oxford. While far from clear, the vehicle looks strikingly similar to the one filmed in Cinco Ranch on Sunday morning.”

The Fort Bend, Texas Sherriff’s Office is investigating the allegations too.

“As the investigation continues, we plan to share more information,” said Jacqueline Preston, the public information officer for the Fort Bend sheriff’s office.

But all flyers contained some form of White supremacy.

He said, “One of my neighbors got one that shows what seems to be Hitler youth and the words, ‘We are the future’ on it.”

The Fort Bend County District Attorney’s Office said that they are aware of the flyers and will determine if they constitute a hate crime.

Middleton explained that since the flyer was placed on the resident’s property, the perpetrator might face criminal trespassing charges.

He said, “We want the public to know that we take this very seriously, and when free speech crosses into hate speech or a terroristic threat, we will be prosecuting.”

Yahoo reported, “More mass flyer distributions have occurred in Texas than in any other state, according to previous reporting, and there were more than 1,200 incidents recorded between 2018 and 2021. The state is the hub of Patriot Front—a White nationalist group that has used the mass flyer distribution technique in 2019 and 2020.”

While hate speech is protected by the First Amendment, hate crimes have increased in America, reaching its highest point in a decade in 2020.

NPR reported that the United States had a reported 7,759 hate crimes in 2020.

The total was the highest it had been in 12 years.

NPR reported, “The number of recorded bias incidents reported by the FBI was the highest since 2008, when 7,783 hate crimes were reported to the agency, federal data shows.

“Nearly two of every three hate crimes reported last year—64%–were motivated by a bias against race, ethnicity or ancestry, the FBI said. Of all hate crimes, 36% were anti-Black or anti-African-American, 10% were anti-white and 9% were anti-Jewish.”

In 2021, Anti-Defamation League CEO Jonathan Greenblatt said in a statement, “As the [Anti-Defamation League] has said time and time again, when just one individual is targeted by a hate crime, it negatively impacts the entire community, resulting in marginalized groups rightfully feeling vulnerable and under siege.”