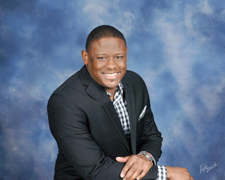 He began writing professionally in 2000, working for such publications as The Kappa Alpha Psi Journal, YL Magazine, African American News and Issues, and Houston Forward Times.

Smith is one of those rare publishers who is just as interested in inspiring readers as he is making a few dollars.

The goal of Regal Magazine is to inspire African American men to achieve their goals, despite the obstacles, and to be a vehicle for Black men to discuss social and political issues that are affecting them.

He is also a member of The Church Without Walls in Houston and a member of the church's media ministry.

Smith has also appeared regularly on "Isiah Factor Uncensored," which airs in Houston on KRIV (Fox 26) and nationally on Fox Soul. The publisher discusses political, social and African-American news along with entertainment, athletic and pop culture issues.

In 2018, Smith also made weekly appearances on the radio show "Pursuit of Happiness" on 950 AM in Houston discussing political and social issues.

Below is a list of links to some of Smith's appearances on "Isiah Factor Uncensored."