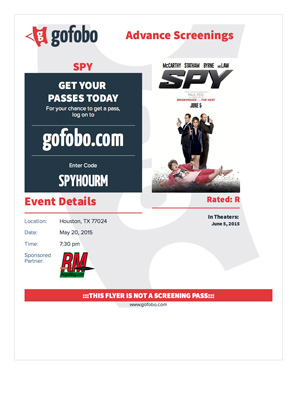 I don’t know how Regal readers feel, but if another country threatened us with a nuclear bomb; I would want a strong leader trying to thwart their efforts.

Strong leadership like that of President Ronald Reagan during the Cold War or President George W. Bush after Sept. 11 would make me feel a little better.

No disrespect to Melissa McCarthy but I might move out of the country if America had to depend on her to stop a nuclear bomb.

I would love to hang out with McCarthy and have a few adult beverages with her, but there are not enough adult beverages in the world to alleviate the nervousness that I would experience if McCarthy was protecting us.

Nevertheless, in the upcoming movie “Spy” also starring Curtis “50 Cent” Jackson, those poor souls in this picture have to put their lives in the hands of one of the biggest jokesters in Hollywood.

That alone makes me want to see the picture so I can pray for all those depending on McCarthy.

Luckily for the first 50 Regal readers in Houston, they can see a free, advance screening of “Spy” on May 20 at Studio Movie Grill City Centre at 7:30 PM.