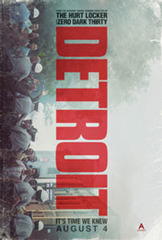 Win Free Passes to Advance Screenings of ‘Detroit’ Throughout Texas

Unfortunately, the movie “Detroit” comes out at the perfect time.

The film focuses on one of the most vicious incidents of police brutality in American history.

Kathryn’s Bigelow’s latest film “Detroit” is a reminder that America has not come as far as many people think in the area of civil rights and police/community relations.

“Detroit” is such an important film to the staff of RegalMag.com, that the magazine is not only sponsoring an advance screening of the film in Houston, but Regal is sponsoring screenings in Dallas, San Antonio and Austin, Texas as well.

All four advance screenings will take place on Wednesday, July 26.  To claim tickets in one of the four cities, click the links below.