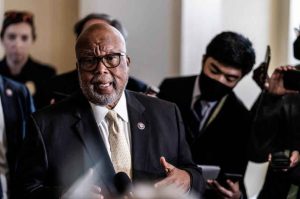 Annually, RegalMag.com awards the Regal King of the Year to a Black man making a positive impact on the community around him.

With that mind, RegalMag.com gives the 2022 Regal King of the Year Award to Rep. Bennie Thompson (D-Miss.) for his work on the Jan. 6 committee, which is investigating the 2021 attack on American democracy, and former President Donald Trump’s role in the deadly insurrection.

At the first Jan. 6 hearing, Rep. Thompson said, “I’m Bennie Thompson, chairman of the January 6th, 2021 committee. I was born, raised and still live in Bolton, Mississippi, a town with a population of 521, which is midway between Jackson and Vicksburg, Mississippi and the Mississippi River. I’m from a part of the country where people justify the actions of slavery, the Ku Klux Klan, and lynching. I’m reminded of that dark history as I hear voices today try and justify the actions of the insurrectionists on January 6th, 2021…

“Throughout our history, the United States has fought against foreign enemies to preserve our democracy, electoral system, and country. When the United States Capitol was stormed and burned in 1814, foreign enemies were responsible. Afterward, in 1862, when American citizens had taken up arms against the country, Congress adopted a new oath to help make sure no person who supported the rebellion could hold a position of public trust.

“Therefore, Congresspersons and United States federal government employees were required for the first time to swear an oath to defend the Constitution against all enemies, foreign and domestic. That oath was put to test on January 6th, 2021. The police officers who held the line that day honored their oath. Many came out of that day bloodied and broken. They still bear those wounds, visible and invisible…They repelled the mob and ended the occupation of the Capitol. They defended the Constitution against domestic enemies so that Congress could return, uphold our own oath, and count your votes to ensure the transfer of power, just as we have done for hundreds of years.”

Hopefully, 100 years from now Americans can look back at what Thompson and the Jan.6 committee did to preserve American democracy and realize how heroic people like the committee chairperson, Rep. Liz Cheney (R-Wyo.), Rep. Adam Kinzinger (R-Ill.) and others truly are for putting their personal desires to the side to uphold their constitutional and patriotic duties.

Prior to the 2020 presidential election, Trump started spreading his message that the only way President Joe Biden could win is if the Democrats cheated and stole the election via fraud.

With that message already established amongst many of Trump’s supporters, the former president began spreading the Big Lie that Biden’s win came from massive voter fraud, which did not represent the truth.

Trump’s legal team had dozens of election fraud lawsuits dismissed because of a lack of evidence.

And on that fateful day in January of last year, he spoke at a rally before many of his supporters resorted to violence to stop former Vice President Mike Pence and Congress from performing their constitutional duties of certifying Biden’s presidential victory.

Even after Biden became the 46th President of the United States, Trump and his supporters have continued to push the election fraud lie.

Therefore, the Jan. 6 committee has convened to lay out all the evidence that it has gathered about what led up to the attack on American democracy, and Trump’s role in the attempted coup.

The Jan. 6 committee interviewed many in Trump’s orbit who testified that Trump knew that he lost the 2020 presidential election legitimately and still attempted to overthrow the election and the American government in its entirety just to stay in power illegally.

Despite the primetime and daytime hearings on the Jan. 6 attack on democracy, many conservative news networks refused to air the hearings, which might have gone a long way in convincing election deniers that Trump lost legitimately in 2020.

As a result, many Republican political candidates campaigned off the Big Lie in 2022.

Many of those election deniers lost their contests, some for key positions that would have had them overseeing future elections.

In that regard, the work of Thompson and the Jan. 6 committee could already be deemed a success.

However, many political pundits and activists believe more needs to be done to safeguard America’s democracy.

Some have pushed a new Voting Rights Act.

Although that faces an uphill battle, many have agreed to amend the Electoral Count Act, which would further cement the fact that a vice president’s role in certifying a presidential election is merely ceremonial.

Therefore, no vice president can overturn election results as Trump wanted Pence to do for him.

Furthermore, the evidence gathered by Thompson and the Jan. 6 committee could lead to the Justice Department prosecuting Trump for his role in the attempted coup.

Many believe indicting Trump would deter others from attempting to overthrow the government or its democracy.

For his efforts to preserve American democracy and prevent the disenfranchisement of millions of Americans, RegalMag.com salutes the Tougaloo College and Jackson State University alum, and member of Kappa Alpha Psi Fraternity, Inc., as its 2022 Regal King of the Year!