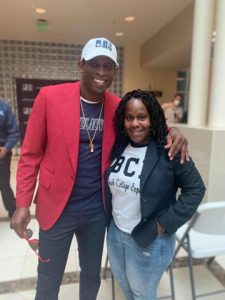 Shout out to the renaissance happening throughout Black college sports.

To all those individuals responsible for the rebirth of Black college football and basketball, RegalMag.com honors you as the magazine’s 2021 Regal Kings of the Year, an award given annually to Black men making a positive impact on the Black community.

Shout out to the Southern University athletics department for investing $80 million to upgrade A.W. Mumford Stadium in Baton Rouge, La. and for planning the first indoor football practice facility at an HBCU (Historically Black Colleges and Universities).

Additionally, shout out to the fans of HBCU sports for tuning into the 2021 Celebration Bowl to the tune of 2.59 million viewers on top of an announced sellout crowd at Mercedes-Benz Stadium.

Because of all of you, something bigger than a movement has begun.

Sometimes a movement becomes so humongous that it becomes impossible to just single out one person for its success.

Sure, Martin Luther King, Jr. became the most vocal and photographed leader in the movement.

However, hundreds of leaders worked side-by-side with King and behind the scenes to change the course of history for Black Americans.

No one will dare compare the HBCU sports renaissance to the life-altering and country-changing Civil Rights Movement.

Nevertheless, the top-notch high school athletes choosing to attend HBCUs instead of predominantly White institutions (PWIs) from Power Five conferences and iconic NFL legends leading these HBCUs to the A-block of “SportsCenter” might have a multimillion-dollar impact on HBCUs and the Black communities that many of them call home.

The new momentum of five-star high school football and basketball recruits choosing HBCUs over PWIs earns the adjective of renaissance because the phenomenon represents nothing new.

As a result of segregation and discrimination, top Black athletes of the past had to choose HBCUs because they did not have many other choices.

Therefore, a time existed when talent like Walter Payton, Jackie Slater, Jerry Rice, Harold Carmichael, Mel Blount and others starred on the gridiron in the SWAC while Bob Hayes, Deacon Jones and others shined at schools now associated with the MEAC and the SWAC.

Furthermore, even when many PWIs integrated their sports teams, Black players often still faced discrimination and racism when it came to certain positions.

Would Grambling State’s Doug Williams gotten a chance to play quarterback at LSU if he wanted to play at Death Valley?

Would Alcorn State’s Steve McNair gotten a chance to play quarterback for Ole Miss if he wanted to take his talents down to The Grove?

History proves that those Power Five schools would have likely made them change positions to something that did not require the same “brain power” needed to play quarterback.

Unfortunately, discrimination existed in college basketball as well, and HBCUs gave talented Black athletes an opportunity to shine before taking their talents to the next level in the National Basketball Association (NBA).

On the hardwood, the SWAC had talent like Bob Love and Willis Reed while legendary coaches like Clarence “Big House” Gaines had NBA talent like Cleo Hill and Earl “The Pearl” Monroe at Winston-Salem State in the 1950s and 1960s.

Even in the 1990s, top-notch basketball talent like Bobby Phills, Lindsey Hunter and Ben Wallace found their way to HBCUs before starring in the NBA.

But like the initial wave of talent at HBCUs, the renaissance began partly because of the lack of opportunity for Black talent at major colleges and the NFL.

Discrimination has long been suspected as the reason for the lack of Black head coaches at Power Five schools and the NFL.

Furthermore, many pundits believe racism is the reason that many of those coaches seem to have a shorter leash than their White counterparts.

Therefore, no one should have been surprised that NFL legends took their coaching talents to HBCUs when they could not get head coaching jobs at PWIs or at the NFL level.

But the seismic shift in the current renaissance really took off when Jackson State University made the monumental decision to hire Deion Sanders as the head coach for the Tigers.

Arguably regarded as the greatest cornerback in NFL history.

And arguably the most charismatic personality in football history, Sanders brought immediate media attention to Jackson, Miss., the SWAC and to all HBCUs.

The fact that the fall 2020 FCS football schedule had to be postponed to the spring of 2021 meant that eyeballs from across the country, Black and White, found their way to Jackson State football and other HBCU schools.

Those added eyeballs from more television exposure, just as much as the talent on the field and on the sideline, will change HBCUs forever if the momentum of the HBCU renaissance continues.

For decades, teams that were predominantly Black made millions and millions of dollars for schools and communities in which most of the people did not look like them.

Furthermore, the money that those schools earned from free labor did not stop Black athletes from experiencing racism from their own fanbase.

Just ask Jalen Rose and Jimmy King from Michigan’s Fab Five basketball team of the early 1990s about the hate mail they received from Michigan alumni.

Therefore, the fact that five-star high school recruits have begun taking their talents to HBCUs means that the money that would go to some PWIs will now go to HBCUs and the Black communities that surround them.

Furthermore, the attention that HBCUs sports will receive will lead to more applications from non-student athletes, just ask the admission offices of schools that have success during March Madness.

That money will lead to better facilities at HBCUs, better professors, more endowments, more academic scholarships and more wealth for the Black community as a whole.

With more wealth, comes more power and less susceptibility to racism and discrimination.

A new day is indeed here for HBCUs and for that reason RegalMag.com names all responsible as the magazine’s 2021 Regal Kings of the Year.