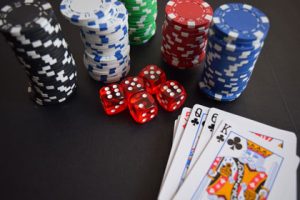 Though it may not seem like it, poker has an extremely long and rich history. In fact, its origins can be traced all the way back to the ancient Chinese game Mahjong. Over the centuries, poker traveled the world and developed into one of its most popular card games.

Today, there’s a thriving culture and community growing around poker. We’ve developed ways to play it as a sport both in-person and online. We celebrate professional players from the Black community like Paul Darden, David Williams, and top poker player Phil Ivey — the Tiger Woods of poker and one of the best poker players of all time. We anticipate tournaments where they compete with other pros from across the globe. We even make documentaries and films that revolve around our love of poker.

If you’re a movie buff, watching a few poker movies might be right up your alley. Below are a few outstanding titles that you can check out.

Love improv and poker? Then you’ll love this story about how a single poker tournament can change lives. Starring famed character actors like Woody Harrelson, Cheryl Hines, and Mike Epps, The Grand uses an open-ended script and vague character direction to create a one-of-a-kind impromptu comedy. Though a little rough around the edges and a bit predictable — with the premise of only one player being capable of winning the tournament’s $10 million grand prize — the film is enjoyable nonetheless.

This star-studded comedy features Mel Gibson as Bret Maverick, who fights to earn the money he needs to enter a winner-takes-all poker tournament. The film is noticeable for showing how players can bluff during a hand. Similar to a game that offers both main and side-quests, this film has a number of light-hearted subplots that aren’t all related to poker. This makes Maverick a great watch for both you and any friends that aren’t as well-versed in poker as the average enthusiast.

Ever wondered how the 2000s Poker Boom started? This epic award-winning documentary tells the story with the help of poker pros like Daniel Negreanu, Annie Duke, and Chris Moneymaker — whose 2003 win ignited the Poker Boom in the first place. All In can help you learn more about the game, its development in the 21st century, and why we play poker the way we do today.

People rarely talk about women in poker. With this documentary, director Sanda Mohr hopes to change that. Poker Queens features the best women in the game, talks about their claims to fame, and studies the obstacles they faced to get there. One major issue tackled here is the disdain with which women are treated in the poker room. One notable scene sees poker personality Sia Layta dressing as a man — and ultimately tripling her winnings in the process.

Stu “The Kid” Ungar is often lauded as the greatest Texas Hold’em and gin rummy player of all time. You can learn more about him through this dramatized version of his struggles, success, and unfortunate demise. With The Sopranos’ Michael Imperioli at the helm, High Roller can immerse you in Ungar’s tale — and even teach you some of his signature moves on the felt.

We rated Molly’s Game as excellent for one main reason: it has a little bit of something for everyone. Sure, this true story does a great job narrating the journey of Molly Bloom as she discovers the world of poker. Beyond that, though, Jessica Chastain and Idris Alba’s superb acting gives us a peek into the human psyche — and how its response to adverse life events can change a sympathetic figure into one that displays less-than-admirable behavior.

The first James Bond film to feature Daniel Craig as the titular character is probably the most watched film featuring poker of all time. Though not entirely about the card game, the film revolves around poker as a major factor: Bond has to stop terrorists from winning funding through poker tournaments by playing on the felt himself. The final hand in Casino Royale is extremely improbable with all players going all in, but it does show how the perceived best pocket cards don’t always win.

Poker player Huck Cheever struggles to make it out of the shadow of his father and 2-time World Series of Poker winner, L.C. Cheever. Though estranged, the two end up competing in the same Las Vegas tournament. This gives Huck the opportunity to make a name for himself — and a chance for father and son to reconcile. With lots of poker action to spare, Lucky You is definitely worth watching.

Though it hails from the ‘60s, The Cincinnati Kid remains one of the best poker films out there. It features the variant Five Card Stud and a young poker player — played by Steve McQueen — as he establishes his dominance at the poker table. Incredible writing somehow helps portray 1930s New Orleans in a timeless manner and wraps the film in a stunning ending that you’ll want to wait for.

Finishing list is one of the first films to reference Texas Hold’em, which wasn’t popular in the ‘90s but is now the most-played poker variant today. Led by stars Matt Damon, Edward Norton, John Malkovich, and Gretchen Mol, Rounders shows all the excitement that comes with the ups and downs of playing poker — and writer John DeVore even credits it as inspiration for many to become players themselves. It was the film that opened up a whole new world to many film fans and is now considered a cult classic.

Poker has a rich history and even richer culture. These films are great starting points for you to enter the rich and exciting world of poker.