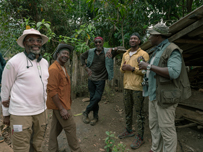 Recently, Rock and Roll Hall of Famer Chuck D of the legendary hip-hop group Public Enemy told Vlad TV that filmmaker Spike Lee approached the Long Island, N.Y. group in the late 1980s because he needed a music anthem for his upcoming film, “Do The Right Thing.”

But luckily, Chuck D did not give the Brooklyn, N.Y. born movie director what he wanted because Public Enemy gifted the world with one of the most iconic protest songs in modern music history, “Fight the Power.”

Chuck D’s interview with Vlad TV got the RegalMag.com staff thinking about the best songs from Spike Lee movie soundtracks.

Back in the day, urban soundtracks rivaled urban films in popularity.

Some critics even believed that Hollywood gave the green light for many urban films so that they could have a chart-topping soundtrack.

While urban soundtracks do not enjoy the popularity that they did from the 1970s to the 1990s, Spike Lee knew the marketing muscle that music could provide a movie.

Therefore, RegalMag.com highlights some of the best jams from Spike Lee joints of the past.

“Da Butt” by E.U. (“School Daze”)—The thing that makes a dance record great is how easy it is for everyone to do the dance. When E.U. dropped the single “Da Butt,” dance floors changed forever. From children to grandparents, everyone did da butt in the late 1980s. And if a disc jockey drops that record at a party today, the go-go beat still forces people of a certain age to hit the dance floor.

“Fight the Power” by Public Enemy (“Do the Right Thing”)—“Fight the Power” had everything necessary for a timeless anthem. The visuals struck fear in people and the words struck a chord with the African-American community because the song assassinated the image of some of America’s biggest heroes like Elvis Presley and John Wayne. Chuck D straight up called Presley and Wayne racist, and Flava Flav said what a lot of African-Americans always thought of them.

“New World Order” by Curtis Mayfield (“Get on the Bus”)—To get Curtis Mayfield to bless a film with an anthem is monumental. This is the brother that gave us “Freddy’s Dead” and the title track to the “Superfly” soundtrack. Mayfield always spoke to the conditions of Black America with songs like “People Get Ready” with the Impressions and “New World Order” was no different. Mayfield sang, “The hunt is on and brother you’re the prey, serving time in jail just ain’t the way, I’m living so hard, baby, that my hair is gray, we got to make a change, it’s a brand new day.”

“He Got Game” by Public Enemy (“He Got Game”)—People sleep on the Spike Lee joint, “He Got Game” starring Denzel Washington and basketball star, Ray Allen. The movie was the bomb and the soundtrack erupted too. But instead of Public Enemy doing an anthem, the hip-hop legends created the entire soundtrack. Chuck D had the verse, “My wandering, got my a** wondering, where Christ is in all this crisis.” Some might frown on questioning God. However, asking God to make sense of senseless chaos should not be controversial at all.

“These Three Words” by Stevie Wonder (“Jungle Fever”)—The three words that Stevie Wonder sang about are sweet and simple as he stated in the song. But when was the last time that you actually said, “I love you” to the people most important to you? Those three words are always important to say. However, with all of the calamity in the world, it is very important to say those words to your parents, siblings and best friends on a regular basis. Wonder told us that almost 30 years ago.

“Revolution” by Arrested Development (“Malcolm X”)—Arrested Development talked about revolution in 1992 on the “Malcolm X” soundtrack. In 2020, the Black Lives Matter movement has started a revolution. On the song, Speech says that this song is dedicated to the ancestors who were raped, killed and hanged “because of their plight for freedom.” He said in 1992 his community was still fired up and still wanted a revolution. In 2020, the community still feels the same way.

“Mo’ Better Blues” by Branford Marsalis Quartet featuring Terence Blanchard (“Mo Better Blues”)—Fans of Spike Lee can still remember the song “Mo’ Better Blues” playing in the background of the movie trailer for “Mo Better Blues,” which starred Denzel Washington and Wesley Snipes. The song featured some of the smoothest trumpet playing of the early 1990s and is still soothing three decades after the fact.

“#1 Stunna” by Big Tymers featuring Juvenile and Lil Wayne (“The Original Kings of Comedy”)—Younger comedy fans might not be able to fathom how big “The Original Kings of Comedy” was in 2000. And people outside of Louisiana cannot begin to imagine how big “#1 Stunna” was at the same time. Parties from Bourbon Street in New Orleans to Club Nitelife and Club Upscale in Baton Rouge, La. could not pack the dance floor if they did not drop this song or any song from Cash Money Records.

“Don’t Talk 2 Strangers” by Prince (“Girl 6”)—How do you go from having Stevie Wonder providing the entire soundtrack to one of your movies (“Jungle Fever”) to just anyone? You cannot. You have to go from one musical genius to another genius as Prince provided the soundtrack to Spike Lee’s joint, “Girl 6.” The lyrics were simple in “Don’t Talk 2 Strangers.” It’s about a parent leaving and advising their child not to talk to strangers. The song was not a hit for Prince. But it became a hit for Chaka Khan in 1998.